Something is wrong with our dear Mojo. 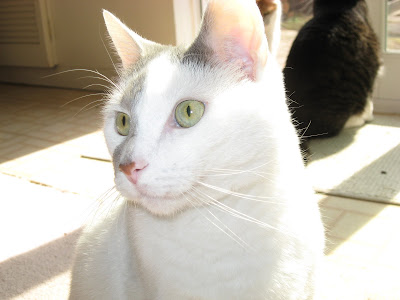 A couple of months ago, he started peeing in places that were not his litterbox. There was a spot on the carpet, which we cleaned up, but then he started seeking out other things to pee on - plastic bags and canvas shopping bags being his two favorites. Maybe he's commenting on my sub-par housekeeping skills and peeing on things he wants me to put away?
The vet suspected a UTI and gave us a round of antibiotics and a cortisone shot - I'm still unclear on what the cortisone shot was for, but I wasn't at that vet visit so I only got the information secondhand. It helped a little, in that his pee stopped being dark and stinky, but he was still peeing on anything I left around too long. I have to be very careful with laundry, blankets, and shopping bags, and make sure they're stashed away quickly. Then we noticed that he was missing fur on his paws - I thought it was a toe tumor at first because this squishy pink blob was sticking out of his paw, but when I looked closer I saw it was just a naked toe. Naked cat toes look very out of place sticking out of a mound of white fluff. And there were also naked spots up his front legs like he'd been pulling all the fur out. His skin is so incredibly pink under that fluff!

Back to the vet, who gave us a second round of the same stuff. This time the cortisone shot was in case there was an allergy or skin irritation causing the hair loss. The fur is growing back but the pee issue isn't resolved. It's frustrating, because I feel like my house smells like a crazy cat lady house, even though we have only three cats and stay on top of the automatic litterbox so it's always very clean for them. He peed in the front closet and it seeped into the hardwood floor, and despite my attempts to clean it up using baking soda, oxyclean, vinegar, and Pine-Sol (all in different attempts), I feel like it attacks my nose as soon as I open the front door. Other people coming in have said they don't notice it, but I think they're just being nice.
It's possible that it's psychological - cats are prone to anxiety and the peeing and fur-eating might be a manifestation of stress - but in that case, I'm not sure what we'd do. Get him on anti-anxiety meds? Regular cat massages and spa days? We give him plenty of attention and love, and I can't figure out what we may have done to stress him out, because our normal life hasn't changed much recently. The vet said he'd explore a couple more physical possibilities first, like checking for bladder stones or tumors, and maybe some dental work because he noticed a decaying tooth, but it's possible Mojo is just stressed out. I hope it's not wrong that I'm hoping it's something physical (and minor!) that we can actually fix. I worry that the food we have him on isn't healthy enough for him and might be causing urinary issues, but he won't touch any other food at all. We've tried fancy expensive ones, canned ones, even tuna, and he doesn't seem to recognize it as edible.

His current run of antibiotics has a few more days to go, and if he's still having problems we'll have to bring him back in. Expect an update soon. If I forget, somebody post a comment asking me to get my act together and tell you more about Mojo, ok?
Posted by Jen at 10:32 AM

Email ThisBlogThis!Share to TwitterShare to FacebookShare to Pinterest
Labels: cats