All you ever wanted to know about your urine sample

How much urine do you guys really need? Is it really so easy to contaminate urine?

How much we need depends on exactly why the doctor's making you pee in a cup. If it's for a pregnancy test, we need a few drops, but if it's to check for a urinary tract infection, we need more. Here's why.

When we receive the urine in the lab, it's often in a tube like this, and sometimes a second, smaller tube comes with it, for microbiology.

Obviously, for most of us, it's incredibly hard to pee into such a small target receptacle, so we're handed a cup to use instead. Using a fancy system of urine cups and vacuum tubes, the staff in the ER or doctor's office can transfer urine to a smaller, leakproof container for transport to the lab without ever having to open the cup and risk contamination. Not to mention that the big urine cups are notoriously leaky, which is gross. 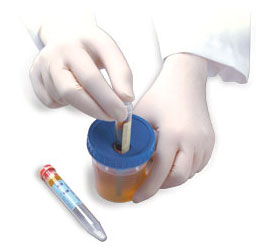 The small tube contains 10ml, and that's what we'd ideally like to receive in the lab, because of what we're going to do with it.

The ER normally orders a "urinalysis" or a "urinalysis with microscopic examination". Both of those start off with a chemical analysis, sometimes done on an instrument that aspirates and tests samples on its own, and sometimes done with a manual dipstick. The dipstick has several raised pads, each of which is saturated with a chemical or dye that will react with a different analyte in the urine. 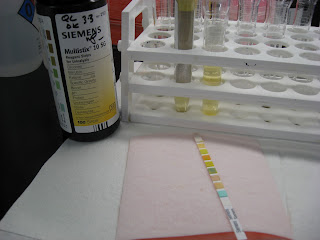 The average dipstick will check for glucose, bilirubin, urobilinogen, ketones, specific gravity, blood, pH, protein, nitrite, and white blood cells. What does it all mean?

Specific gravity tells you how concentrated the urine is, and it's very variable depending on how well hydrated a person is. The pH can be vary depending on diet. Bilirubin and urobilinogen can give some information on liver function. The presence of sugar and ketones can indicate diabetes - there shouldn't be sugar in the urine at all unless the blood sugar is very high, and the presence of ketones means that the body isn't able to metabolize sugars and is resorting to breaking down protein and fatty acids. Someone on a zero-carb diet will have ketones in their urine, but they won't have sugar. Protein is a bad sign, because the filtering apparatus in the kidney is normally too small to let proteins through. Proteinuria can be a sign of kidney damage or, in a pregnant woman, pre-eclampsia. Blood is not good to find either, because it can mean kidney damage, with red cells leaking from the blood all the way up in the kidneys, but it could also be from further down the line in the bladder or urethra, or can be a contaminant (when a menstruating woman provides a sample, for example). Nitrite and white cells, together, indicate an infection, because some bacteria produce nitrite as a by-product, and white cells will be around to fight the infection. Not all bacteria will make nitrite, though, so if it's negative you're not necessarily in the clear. That's what the microscopic exam is for.

Once we've done the dipstick test, we only proceed to a microscopic exam if it was ordered, or if one of the parameters on the dipstick test indicates its necessity. Abnormal blood, white cells, nitrite, protein, and glucose can trigger a microscopic exam. In lab-speak, we call this a reflex test, where the result of one test automatically triggers a second test. We centrifuge the specimen, pour off the liquid portion, and examine any sediment from the bottom of the tube. We put a drop on a microscope slide, and look for bacteria, red and white blood cells, and crystals. All this gets reported to the ER or the floor, and the doctor decides whether to order a microbiology culture on the second tube.

All this work requires a "clean catch" specimen, which is why you're handed a little cleansing wipe and told to let the first little bit of urine miss the cup before starting collection. That area of your body is notoriously bacteria-ridden, no matter how clean you think you are, and if the bugs on your skin get into the cup, it can look like you have an infection when you don't. Also, if epithelial (skin) cells cloud the urine, it's hard to look through the mess to find red cells that could indicate a serious problem. If there are too many epis (as we call them) in the specimen, we'll usually ask for a new one, because it's not going to be very useful. Obviously, the problem of blood cells contaminating a specimen of a menstruating woman is a pretty big one, but the doctors know that from the start. If it's extremely important to get a non-contaminated specimen, they can use a catheter and go straight to the bladder, which isn't fun for anyone!
Posted by Jen at 8:30 AM