So sue me, I'm tired of mashed potatoes. I even tried jazzing them up by stirring in onion dip last time, and while it was tasty, it was still mashed potatoes. The magic is gone, and I think I need to see other potatoes for a while.

New mandolin slicer + bag of potatoes I refuse to mash = scalloped potatoes!
I guess it could also = chips, but I wasn't in a deep-frying sort of mood.

I peeled the potatoes and ran them through the mandolin slicer without hurting myself, which is an accomplishment. I want to buy a chain mail glove to protect my clumsy hands, but for now I went slow and used the special food holder that comes with it, and the only downside was the 7 small chunks of wasted potato from the bit that stays stuck in the holder.

I sautéed the onion in butter until it was soft, and then whisked in the flour with some salt and pepper, and let it get brown. Whisked in the milk and then let it come to a bubble, then added the garlic cloves and then eased up on the heat and let it simmer a while to thicken. I had to keep whisking occasionally to keep stuff from sticking to the bottom. Once that looked ready, I fished out the garlic cloves, and then stirred in the cheese.

I sprayed a baking dish with cooking spray and then poured some of the sauce into the bottom to coat it. Then I layered in the potatoes, taking much more care than I should have, because it really doesn't matter. But I did it right this first time, overlapping the slices slightly till I had a whole layer, then pouring sauce on it, then another layer, etc. I had three layers by the end, and then I topped it all with the rest of the sauce and some extra grated cheese. Popped that in the oven at 350 for 40 minutes and it was perfect. 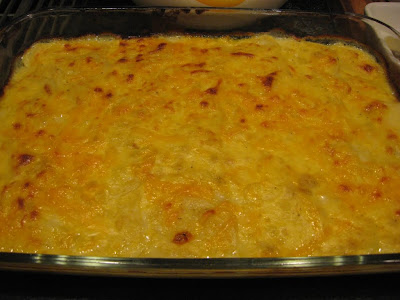 Next time I'll probably just throw all the potato slices into the sauce and pour the whole mess into the baking dish, because the layering doesn't matter and you can't even see it except for the top layer, and that was covered in enough cheese to camouflage it anyway.
Posted by Jen at 9:52 AM